I know, New England has had a terrible and weird winter. Balmy instead of cold, and three Nor’Easters in April? Really? And then on the first warm day a week or so ago, I found two spiders in my house! Not cool. I like the idea of spring, but not the reality.

But yesterday, May 2, was indeed a spring day. Some places the temp hit over 80 degrees, and it was glorious outside my own house. Dot, our mini-schnauzer, just loves to stay outdoors when the weather is nice. (She also likes to stay outdoors when the weather is crummy, but we make  her come in. She’s not the brightest.) I fully expected her to be out as long as possible yesterday. But it really wasn’t that hot that she had to dig herself a hole to stay cool in. 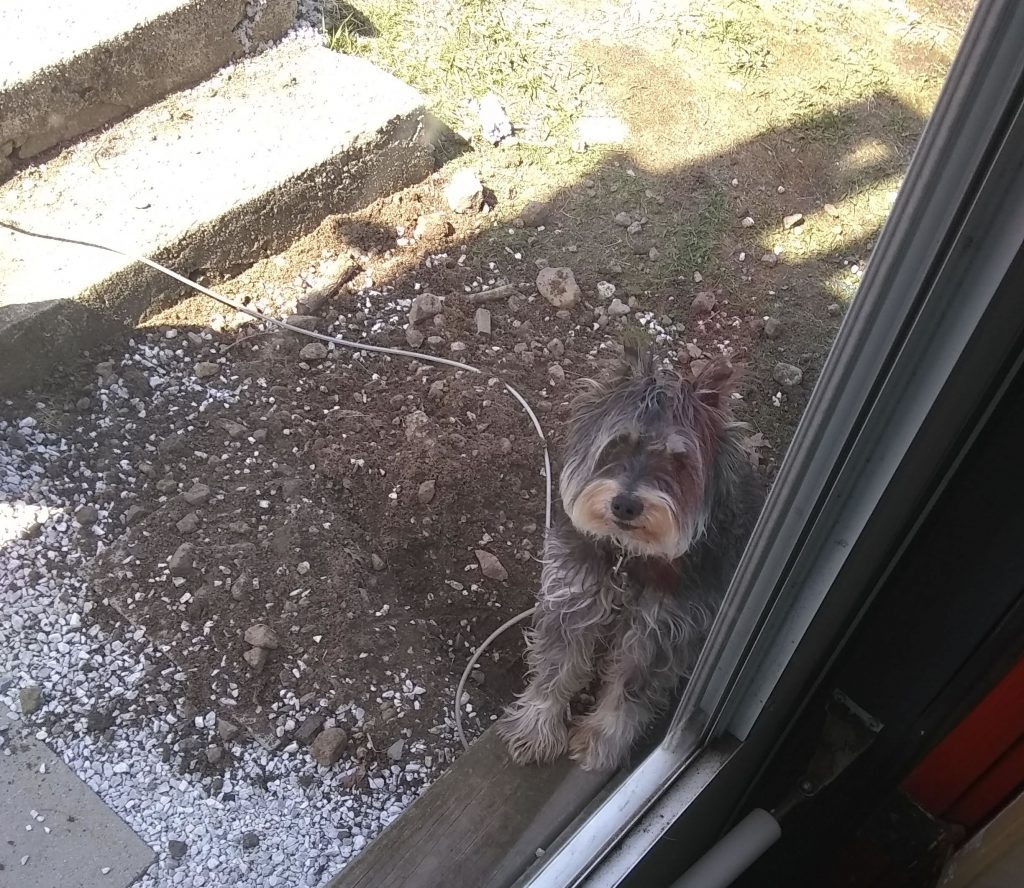 She doesn’t even look guilty! My poor yard.

Since I’m not out and about anymore, I’ve been trying to pick up the housework slack. Mind you, I’m not crazy about housework in general, but I’m giving it an honest try. I’ve actually been able to load the dishwasher without Vin rearranging it, and can turn it on without needing written instructions.

Vin chops up all the week’s vegetables on Sundays. He always says he’s afraid of me doing it because I’ll cut myself and he doesn’t want to have to take me to the emergency room. (Geesh, need stitches on a sliced finger once and you never live it down!) But I’ve been making the salads and chopping up fruit for quite some time without incident.  Well, maybe he’s on to something, because the first Sunday he lets me chop vegetables, I slice into a finger. I guess I’ll just stick to fruit.

And dusting. I really hate dusting, but with all the dog fur, it has to be done. We used to joke about dusting every Thanksgiving holiday, whether the house needed it or not, but I am trying to dust way more often, at least one room every week. This past week I did the dining room, which is where the thermostat is kept. Hmm, didn’t realize that thermostats are so sensitive. Did you know you can change the temperature setting by running a rag over the top of a thermostat? Right, I didn’t know that either. No wonder it was so stinking HOT in the house even though the air conditioner’s been running and this past week’s heat wave ended. Having the heat set to 75 degrees at the same time will do that. Good thing Vin heard the furnace kick on, or we might have had the heat wave longer than the rest of Massachusetts.

I am so lucky! I get to play bass clarinet for the Romeo and Juliet excerpts in the upcoming North Shore Philharmonic Symphony’s concert in April. Here is one of the movements:

Isn’t the bass clarinet part incredible? This is the scene after Romeo and Juliet are married but before they separate to fake their deaths. And we all know how that turned out. I hope the end result on my unreliable bass clarinet turns out better!